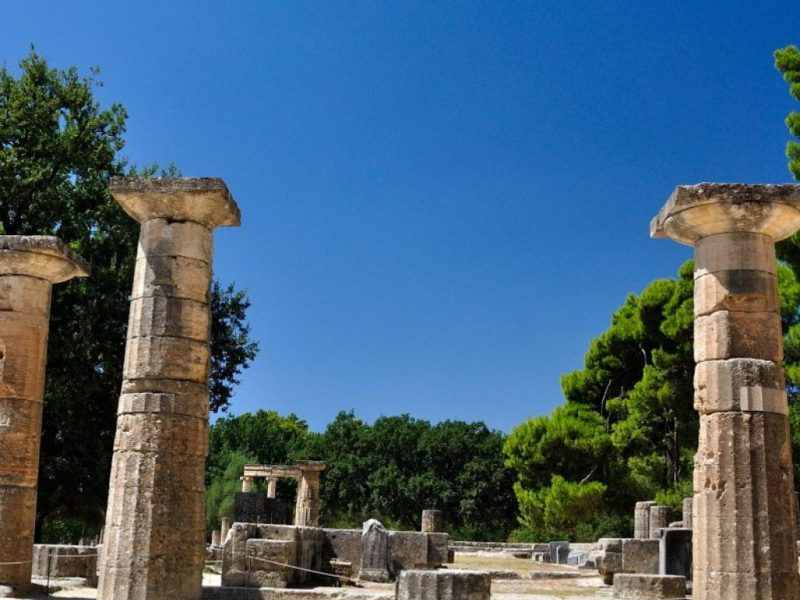 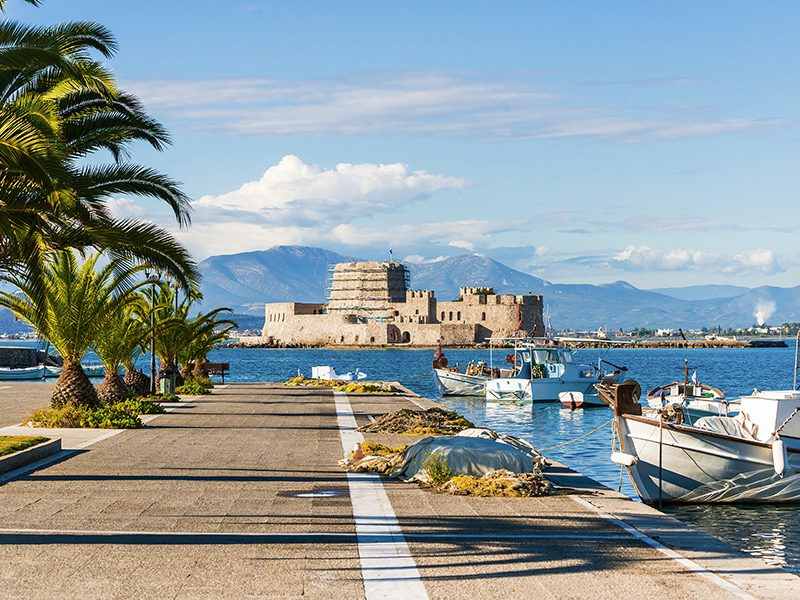 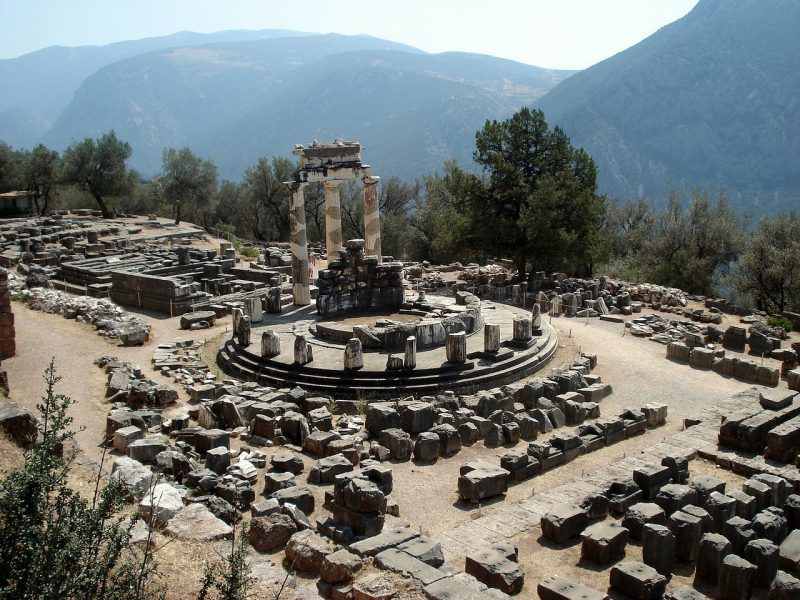 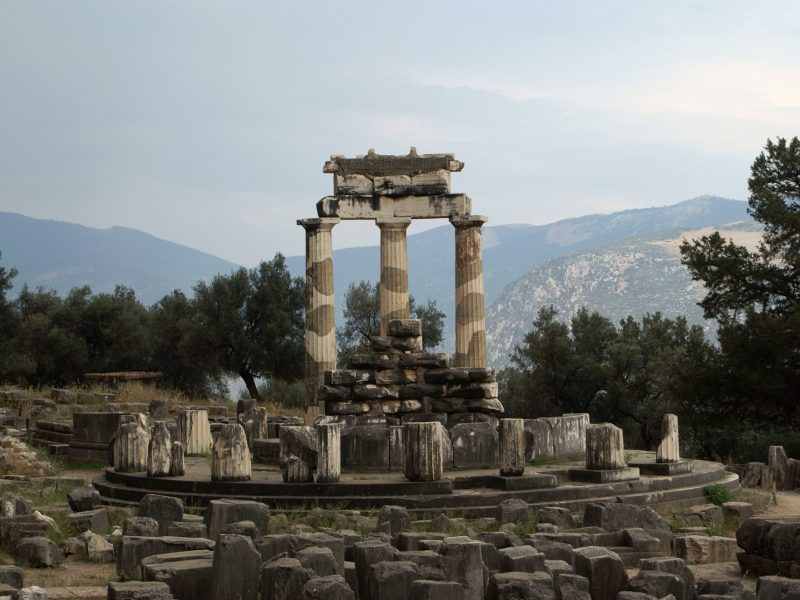 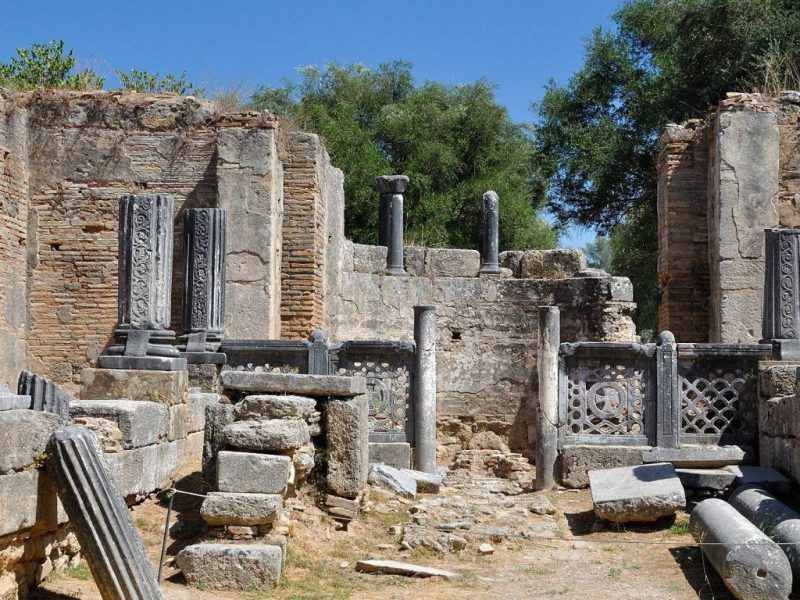 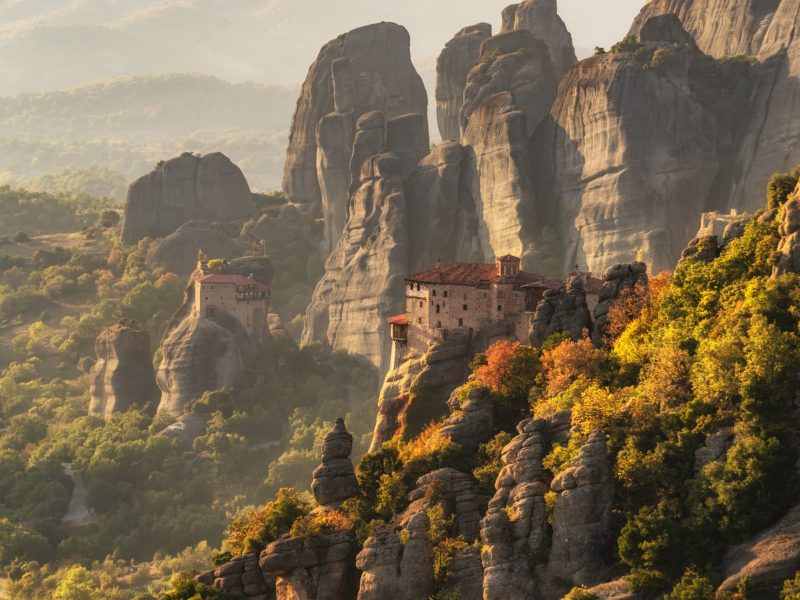 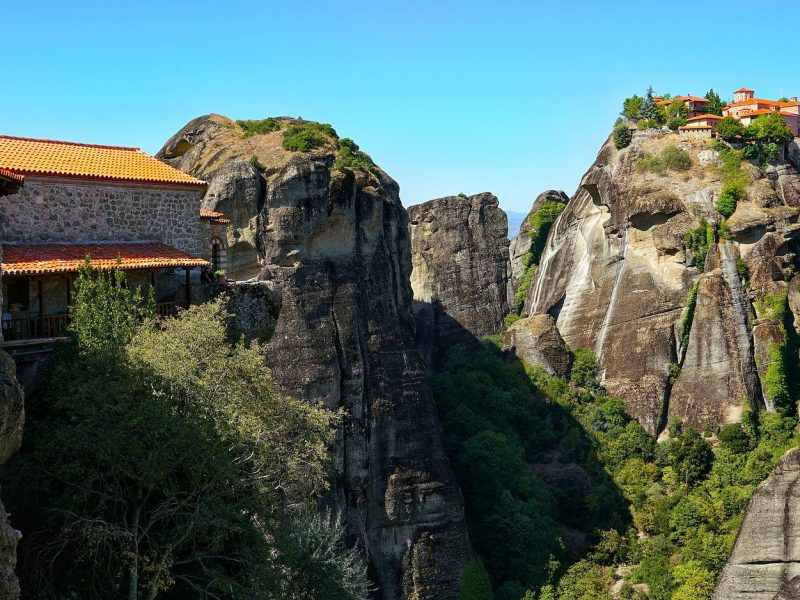 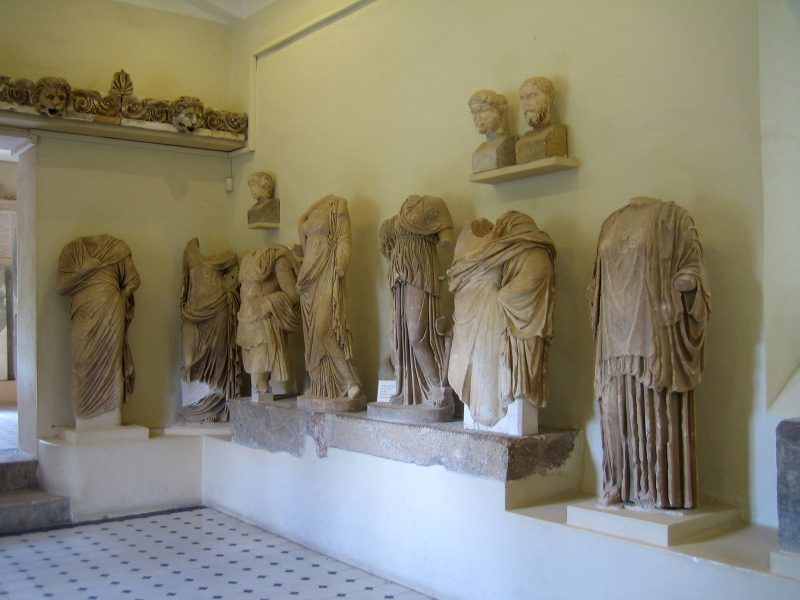 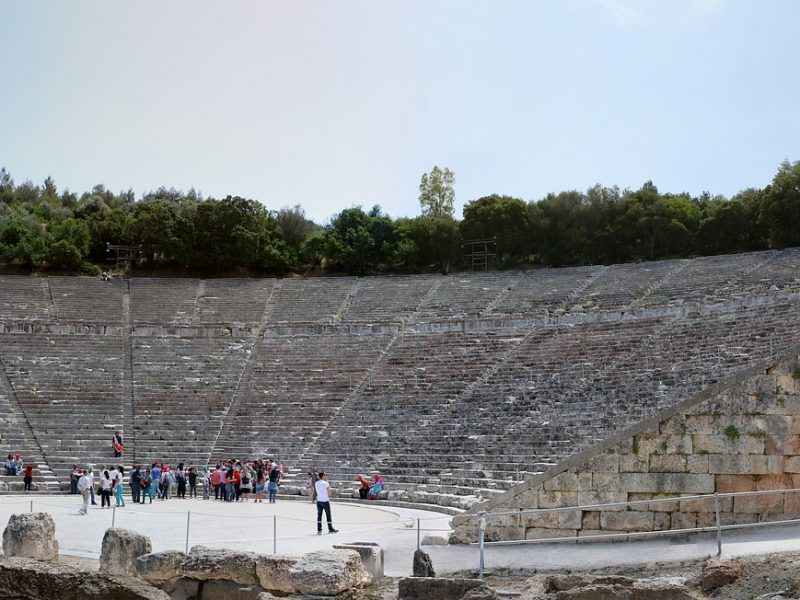 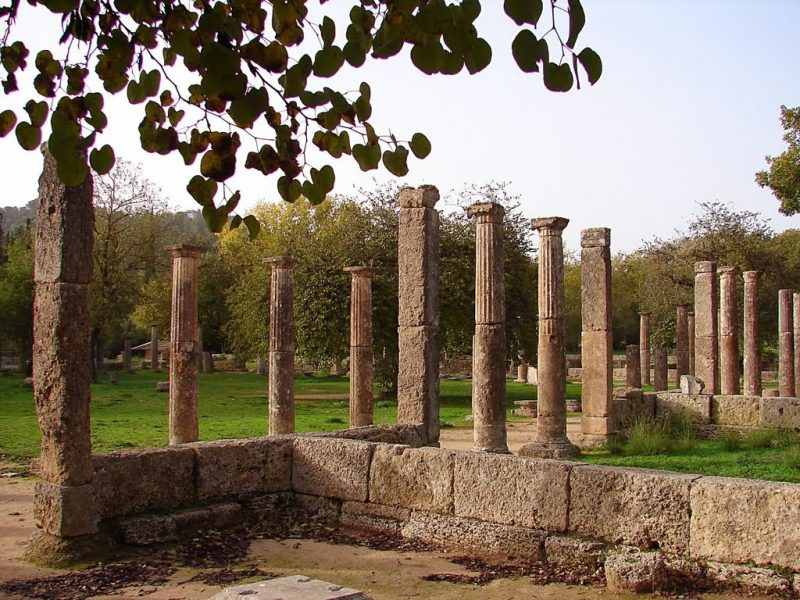 Join this amazing 5-day ancient Greece tour and get immersed in the country's incredible history, mythology, and culture. Explore charming Athens and admire the imposing Acropolis, see the world-famous Meteora monasteries, visit ancient Greek sites and catch sight of the birthplace of the Olympic Games.

◾ Visit Epidaurus one of the most important archaeological sites reflecting the splendor of Greek culture
◾ See ancient Greek remains and the tomb of Agamemnon in fascinating and mysterious Mycenae
◾ Travel to ancient Olympia and explore the birthplace of the Olympic Games
◾ Visit Delphi, UNESCO World Heritage Site, at the foot of Mount Parnassos, once the most famous Oracle of ancient Greece
◾ Explore the stunning UNESCO World Heritage Meteora rocks and admire incredible views from the top of the cliffs

TOUR DURATION: 5 days (4 nights)
MEETING POINT: At your hotel
LANGUAGE/S: English, Greek
AVAILABILITY: Daily, all year round
WHO CAN COME: Ancient Greece Tour is suitable for everyone. Not suitable for persons using a wheel chair

Day1: Arrival day - Cape Sounio
Get greeted at the airport for a comfortable luxury transfer to a selected hotel. In the afternoon join a tour to Cape Sounio, driving along the coastal road, past the wonderful beaches of Glyfada, Vouliagmeni, and Varkiza. Once at the site admire the white marble pillars of the Temple of Poseidon and admire amazing views of the Saronic Gulf.

Day 2: Athens - Corinth Canal - Ancient Epidaurus - Nauplion - Mycenae - Ancient Olympia A (390 km – 6 hrs)
After breakfast set off for your first destination the Corinth Canal to admire this 19th-century construction megaproject. Then continue towards the world-famous Theatre of Epidauros, famous for its classic Greek construction and astounding acoustics. Enjoy the arts! Be captivated by the theatrical performances from Euripides, Sophocles, Aristophanes, and Aeschylus. Drop a pin or coin on the stage… it will be heard even if you are sitting in the last seats of the theater. Visit the Epidaurus Archaeological Museum known for its reconstructions of temples and its columns with inscriptions and the Asclepius, a sanctuary dedicated to the ancient Greek demi-god of medicine Asclepius.

Continue towards the charming seaport town Nafplio with its spectacular waterfront, the narrow cobblestone streets, great historic buildings, and the well-preserved Palamidi and Bourtzi fortresses. The town was the first capital of the modern Hellenic Republic after the 1821 War of Independence against the Ottoman Empire. Thanking the French for their contribution in the War of Independence against the Ottomans, an obelisk is erected here depicting a French and a Hellenic woman in their struggle for Liberty. Visit Constitution Square, the most important and historic square in Nafplion named after the Constitution that Otto, the first king of Greece was obliged to grant after the 3rd of September uprising in 1843.

Continue your Ancient Greece tour with a visit to the archeological site of Mycenae. Rich in gold! King Agamemnon’s mythical kingdom, sung in Homer’s epics, is the most important and richest center of the Late Bronze Age. See the Lions Gate, the main entrance of the Bronze age citadel of Mycenae erected during the 13th century BC as well as the Grave Circles A and B, Royal cemeteries situated to the south of the Lion Gate and outside the Bronze Age citadel.

Then, drive to Ancient Olympia that hosted the original Olympic Games founded in the 8th century BC. Its extensive ruins include athletic training areas, a stadium, and temples dedicated to the gods Hera and Zeus, built in 590 BC. In modern times the torch of the Olympic flame is lit in its ruins by the god Apollo. See Philippeion the only circular building inside the Altis. One of the finest examples of ancient Greek architecture, it was dedicated to Zeus by Philip II of Macedonia after his victory at Chaironeia in 338 BC. The monument was completed by his son Alexander the Great.
Overnight in Olympia. Breakfast and dinner included.

Day 3: Olympia - Delphi (250 km – 3.5 hrs)
After your breakfast visit the Archeological Museum of Olympia exhibiting incredible artifacts from the actual site, including the Statue of Zeus, a giant seated figure about 13 m tall. You can also visit the Museum of the History of the Olympic Games as well as the museum of Archimedes regarded as one of the leading scientists in classical antiquity. Visitors will have the opportunity to see replicas of his inventions and to interact with them.

Then, continue your ancient Greece tour to Delphi town. Delphi is famous for the ancient sanctuary that grew rich as the seat of Pythia, the oracle who was consulted about important decisions throughout the ancient classical world. The Greeks considered Delphi the navel or center of the world as represented by the stone monument known as the Omphalos of Delphi.
Overnight in Delphi. Dinner and breakfast included.

Day 4: Delphi - Meteora (310 km – 4 hrs)
Start your day with a visit to the archeological site. See the Temple of Apollo, the Ancient Theater, the Stadium, the Athenian Treasury, the Gymnasium, and the Sanctuary of Athena Pronaia.

Continue your ancient Greece tour at the Delphi Archaeological Museum that houses many important ancient Greek artifacts from the excavations at Delphi including Frieze of the Treasury of Sifnias, the Naxian Sphinx, the Omphalos signifying the center of the earth, the Kouros of Kleobis, and Biton and the statue of Antinoos.

Depart for Kalambaka, a small town located at the foot of the astonishing Meteora. Overnight in Kalambaka. Breakfast and dinner included.

Day5: Meteora- Athens (355 km – 4.5 hrs)
Start your day with breakfast and a tour of the world-famous Meteora. Among striking scenery, perched on top of huge rocks which seem to be suspended in mid-air, stand ageless Monasteries, where you can see exquisite specimens of Byzantine art.

Return to Athens via Thermopylae. See the monument of King Leonidas erected in 1955 and created by the sculptor Vasos Falireas. The brass sculpture of the Spartan King with his spear and shield is truly amazing and impressive. Arrive in Athens at around 8.00 pm

◾ Comfortable and light clothing is the most suitable for traveling in Greece
◾ Visitors should not wear sleeveless shirts, shorts, short skirts, or skimpy clothing when visiting temples, religious or official buildings
◾ Sun protection, sunglasses, a hat, and mosquito repellent can be very useful during your stay in the summer months

◾ The Cape Sounio tour departs at approximately 3.00 pm. You will need to book a flight that arrives in Athens around 12.00 noon in order to have the time necessary to go to the hotel for check-in first and then board the tour bus. Alternatively, if you arrive between 1.00 pm and 1.30 pm we will arrange to transfer you directly to the departure point of the tour.

◾ The estimated arrival time at the airport at the end of your tour is 8.00 pm, so please book the departing flight accordingly (or book an additional night in Athens)